The ginat. A name has been resonating in my mind and sending tingling down my spine for a long time now. Rebuffet has ranked this climb as 99/100 in the classic alpine routes, in hardness and seriousness and it is the hardest alpine route I had attempted so far. 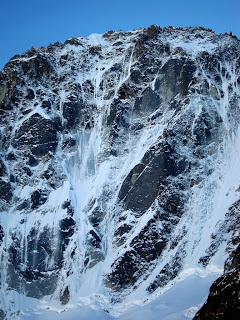 Looking up at the route its stunning, long, steep, cold, inhospitable and scary.  It also holds a lot of history, most notably with Jamie Andrews unbelievable survival for 5 days and nights on the peak and one of the most dangerous rescues in the history of the alps. After listening to three of his talks, just 2 weeks ago, his story is firmly imprinted in my memory and serves as a grave reminder of how serious alpine climbing can be. This was all playing on my mind in the argentiere hut and prevented any decent sleep being had. Despite these reasons for caution I was still feeling very positive and optimistic about the route. 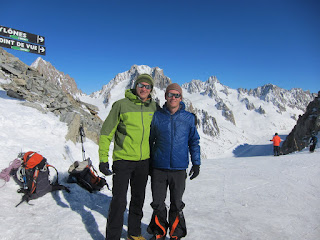 Speaking to the guys in the argentiere hut, helped settle my mind. There had been many people climbing the route this season it is in the best condition for several years, apparently. Also hearing reports from friends Scott and John who had climbed it recently, about an easy descent, great condition ice and being a classic route, reassured me we had chosen the right objective, so psyche was high. 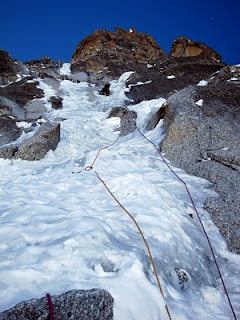 1.00am was our wake up time, and a cracking breakfast was laid out in the hut, we joked about how ‘civilised’ this all was and how we weren’t ‘suffering’ enough. Not something we would be saying 20 hours later when we reached our destination!

1hr march across the glacier and a stomp up 300m to the start of the route, we geared up, feulled up and manned up to get over an initial bulge in the bergschrund, a pretty cool experience at 3.30 in the morning! The first pitch about 300 m of 65′ ‘toffee’ ice, thick enough for good axe placements but inadequate for ‘bomber’ protection. The spin drift was unbelievable and totally unexpected, like Scotland but x 10!!! Climbing was more by feel than sight as looking up allowed the snow into your core. 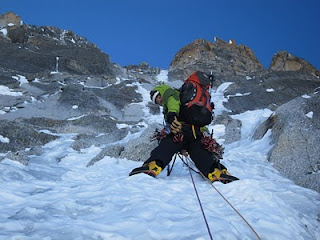 3hrs into the route we had made good progress, moving together all the way and well on track for finishing well within our target time of 10 hrs. Unfortunately in the dark I had ventured 20m off route onto some unconsolidated snow and had a time, energy and fear consuming pitch to make it to what I thought was the natural belay marked by a turd. The turd must have come from higher up on the route and an unsatisfactory belay was made while we were overtaken by two Frenchies. This escapade had taken as much as 2 hrs and a lot of energy and psyche and we moved much slower after this. We joked at how we thought the frenchies planted it there to throw us off the scent so they could overtake us. 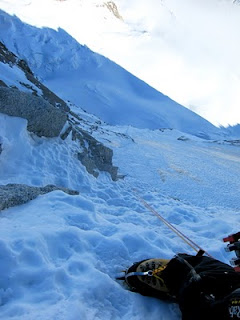 The sun came up and my mistake became obvious, we got back on line and cracked on for several hours without a break, enjoying pitch after pitch of good angle ice on varied and interesting terrain. Dissapointed however by the frozen power bars in my pocket, I was desperate for some calories and water. 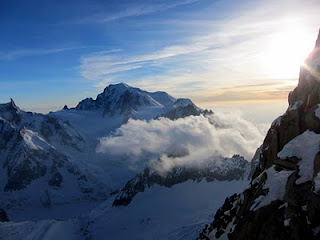 Chris took the final lead to the summit Which we reached about 3pm having spent 12 hrs on route- 2 hrs longer than we wanted to. We had done it in 4 long pitches and moved together the whole way. An awesome route which tops out where Jamie Andrews spent 5 nights on a knife edge ridge. This really brought home what he had endured on the mountain, withstanding -30’C, 150 kmh winds in such an inhospitable place. Much respect! 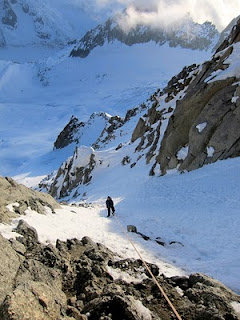 An easy abseil down the other side onto the glacier and a trudge down to the couvercle winter hut across the glacier. This is a walk that can take 1 hr if your fast, In our tired and dehydrated state it took 4 hours of trudging slowly. 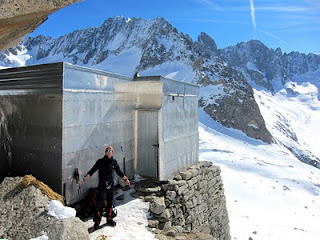 So a long day on the hill, we completed a classic North Face,  climbed in good style at a reasonable pace and had a good day. I would like to make an official apology for not letting people know we were safe in time and causing undue worry. I am sorry! It won’t happen again. Thanks for looking out for us.