On the road at last with warren and Spencer, great to be on the go after a week of worrying about the event and making sure everything is done before we leave. The main worry about the event is the temperature is looking like its going to peak on the day at 37’C, which could massively increase our times and possibly could prevent us finishing. Our loved ones went to great lengths to reduce our worry by preparing hampers, cooking high energy flapjack and loaning the family car. Much appreciated! 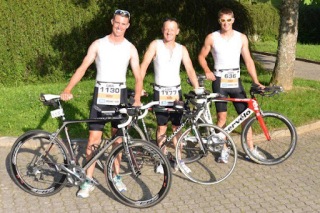 916km to get to Klagenfurt from geneva, travelling in Spencer’s pick up truck loaded to the brim with triathlon kit, mega expensive bikes and enough pasta for an army of triathletes. Around 10 hours later we arrived at our hotel in karinthia, set in a beautiful area and surrounded by High mountains it’s an incredible place to stay and a great setting for an ironman.

Some problems with our booking meant that we weren’t in our hotel room but in a static caravan round the corner. The team was not impressed so we haggled for a free dinner, breakfast, an upgrade the following day, and a free night, so not all bad. A swim down in the lake after dinner Helped get the journey out of our legs and we could then look forward to what is to come.

Meeting a fellow ironman and hearing about his experiences from the year before certainly bought home that it is a big challenge and can’t be underestimated! A story about spending an hour in the medical tent and having to hold his diaphragm with his hand to stop it cramping up made us reevaluate our expected times and add an hour .. Or two! The forecast is for 37 ‘c on Sunday which makes dehydration, sun/heat stroke, etc strong possibilities so we all need to take it much steadier than our usual training sessions together which usually turn into a race by the end.

Waking up in the morning in excruciating pain became clear I couldn’t ignore my tooth ache any longer and had to get my tooth out. Not ideal preparation for the race but if I didnt have it sorted, I doubted whether I could have taken part. The dentist took one look at my wisdom tooth and decided it needed removing. Absolute agony of the injections but no pain at all when he levered my tooth out, then agony again when the anaesthetic wore off. It wore off while registering for the event as spencer commented that I seemed like ‘a right  Miserable b*****d.’ later on in the day and the pain was gone and it felt amazing to have it finally have it sorted and could look forward to the race again!

Shaving my legs is something I never thought I would do, but having not seen one person here with hairy legs and realising that it is just something you do in this game and the time was now. Warrens time came straight away after with minimal amounts of persuasion, as if he has been thinking about doing it for a while. The benefits of doing this are minimal, but with a lot of time to kill it seemed like a good idea

Bikes prepared, bags prepared, special needs bags sorted, food organised, new goggles, hat, belts, etc  a massive organisational task for competitors an incredible organisation needed to run the whole event. It does seem to be done extremely well though and as expected considering the 550 euro entrance fee! All this to call yourself an iron man, is it all going to be worth all the effort? We will see in a few days….. 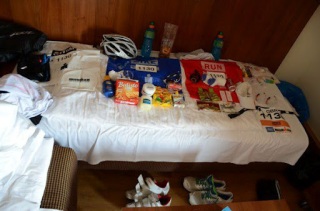 Early start at 4.00am to have a big breakfast, the last meal before we will be on the go for 12 hours. Down to transition to put bottles on the bikes and for final checks. Spencer realised his front tyre had gone flat which was worrying but pumped it up and left it hoping it wouldn’t happen again. The atmosphere down on the lake front was incredible, so many supporters and incredibly well organised. A sense of trepidation but also optimism being in a beautiful area and surrounded by 2700 athletes who are all preparing to take part.

Birthday mentions were given on the loud speaker for spencer celebrating his 37th bday and a sermon given by a priest stood in the water in front of us. The starting canon went off at 7.00 and that was it, the race was underway, a 3.8k swim in worthesee lake finishing with a 900m swim down a canal lined with supporters cheering everyone on. The canal section of the swim makes it very unique and it’s really cool but, i imagine it’s much nicer for the lead pack who would have clear clean water to swim through, not weedy muddy bog water we had. The swim was carnage, people swimming over the top of you, hanging on to your ankles for a draft, accidentally punching you, it was as much a fight than a swim. Spencer managed to stay out of the main pack and benefitted from clear water to swim without fighting, something I’ll definitely do next time. I think for all 3 of us it’s probably the furthest we had swum without a wetsuit.

Into transition pick up the bag and prepare for the bike, quick change and pleased to be sitting on my bike, my strongest event. Great initial speeds with wind behind and my bike working as well as it can meant I was doing 42k/h average, passing loads of people until I caught up with spencer who had had a good swim but a nightmare in transition with his tyre going flat again and had to stop and pump it up. We rode together for a while making great speed on a fantastic course.

The course is incredible, very fast, great scenery and the support is unbelievable! People all around the course and seeing chrissy Wellington a couple of times cheering everyone on was brilliant. There are a couple of sizeable climbs with a total ascent of 1600m for both laps. After 90k I was feeling great and done the 1st lap in 2.30h, a great split, and happy to do another lap. 10 k into the first lap I passed spencer stood at the side of the road shouting Duncan I’m finished! Gutted, it was clear that he had some more bike problems. It turns out he had lost his spare tubular earlier in the race, and had a slow puncture, so he thought he was done.

It turned out that spencer wasn’t out of the race but just had a big set back. Usually you are not allowed outside assistance and he was disqualified by a marshal for needing it. After pleading, shedding some tears, and mentioning it was his birthday he got the disqualification lifted, unbelievably with the help of some supporters  who went to exceptional lengths to get spencer back in the game. 5 people stopped to give up their spare inner tubes, incredibly selfless and one of the tubes fitted so spencer was back in. This epic had taken around 1.40h so spencer was well back in the field and riding with the chubbers, not something hes used to.

Meanwhile I was finishing the 2nd bike loop finishing 180 k in around 5.25h, really happy with the time and set for the run. Another quick transition and a chance to lather on some sun cream, for a 42k run in baking 42’c heat! For the 1st 3 k I felt fine and was running well but, was starting to overheat and felt dizzy and a bit spaced so I gave myself some time, walking to cool down and feel better but it was way too hot for me and muscles were cramping up and I was feeling pretty miserable.

Seeing warren perked me up a bit especially when I realised he was only about 4k behind me and looking like he was running well. I was running again if it could be called that, more of a fast shuffle just not that fast. Around the 20k mark warren had caught up with me and we ran together for a bit. The support around the run was again, incredible. Aid stations every 2k, loads of people cheering and hosepipes spraying athletes to try and cool them down in the intense heat. Several athletes though Clearly weren’t coping well with the heat and were passed out on the side of the course being treated by the medics, probably suffering from heat exhaustion.

I was still under the impression that spencer was out of the race so it was bit of a surprise that he was running the other side of the course shouting ‘oi dunc, I was held up 2 hours’. Unreal, held up 2 hours and now he was only around 6 k behind me, he has clearly had an awesome run. I was still in a world of pain but couldn’t let spencer catch up so I dug deep for the last 10k and made sure I finished in a respectable time and thankfully finished in front of him. I ran a shocking marathon taking 5h5m but finished in 12.04 overall which I’m happy with considering the heat and everything. Spencer crushed the run finishing in 3.48h , and overall 12.09 which is incredible considering a 2 hour stop! But Wazza was the victor though finishing overall in 11.45, an incredible effort, dug deep, reigned it in on the run and had a cracking race! Not bad for a 43 year old. 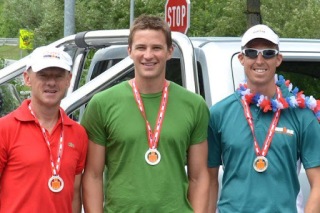 An incredible day, a great experience and a brilliant event.