From Gstaad to Kandersteg in 2 days on skis was the aim covering 62km, 4000m up and 6000m down. We weren’t sure if it would be feasible but as we only had 2 days before we had to get back to families, we thought we would try and get as far as possible.

Spencer and I took the lift from the Col du Pillon up to the Tsanfleuron glacier to start our quest. Memories from the year before came back when we attempted the route as a group of 10 before having to bail with bad weather. The weather was set much better this time with a big high pressure over Europe, so we were sure the weather would hold.

A big skin up the airy ridge of the Arpelistock and a great descent down to the Geltenhut went quickly and by 11am we had already saved a day from the normal tour. The Wildhorn was the second summit which we got to around 2pm. We realised we could have carried onto the next hut the Wildstrubel to make the following day much easier but unfortunately the Wildhorn hut guardian wouldn’t let us change the booking so we had to stay there for the night. This meant we got a great descent down to the hut but also added a lot more ascent to the following day having to reascend our tracks.

A good couple of recovery drinks at the hut (beers), and a great feed fueled us up for the following day which was going to be a big one! We still had 40km to cover and 4 big summits so we weren’t sure if we could do it safely to make the descent to Kandersteg before the afternoon when it can become dangerous. An early start was in order so breakfast was booked at 5.45am.

The Schneiderhorn was the first ascent with 800m skin up from the hut, we made good time to see a great sunrise from the summit. An awesome descent down to the Wilsdtrubel glacier, where I took a fall onto my pole snapping it in the middle. With just the one pole now we skinned up to the Wildstrubel hut where the hut guardian helped by giving us some gaffer tape so I could splint my ice axe to my pole to temporarily fix it.  It worked well enough but I was very aware if I fell again on it I could get my axe in a painful place!

The glacier du Peine Mort was stunning beautiful and thankfully descended gradually so we didn’t need to skin across the whole thing. The climb of the Wildstrubel started at the end of the glacier and we ascended 600m to a windy summit. We couldn’t hang around long on the summit and jumped on our skis before they blew away to make a world class descent down to the Lammeran hut. We took a bit of a deviation ending up skiing through a crevasse but found our way on good snow to the start of our final ascent up to the Rote Totz. It was a long meandering gradual ascent which killed the already sore feet and blisters but got to the top around 2pm meaning we were in time to make a safe descent down to Kandersteg. We were chuffed there was no more up hill and really pleased we were about to complete the full traverse in just 2 days.


A truly awesome descent down to Kandersteg ended a great couple of days in the mountains. Just the train ride back to Gstaad and we were finished. Thanks to Spencer for manning up with heavy gear and bad blisters, Kerry for understanding I need a bit of man time every now and then and Jo for the lifts to and from. 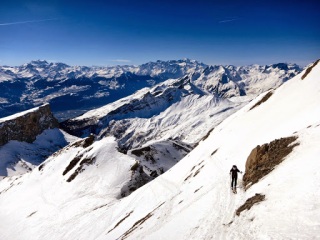 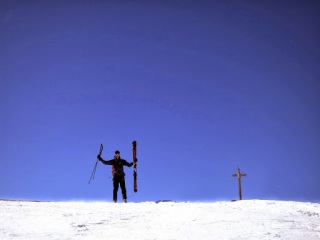 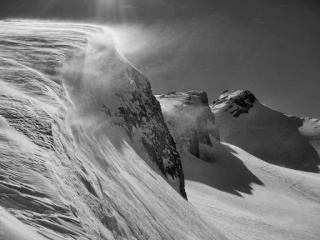 Ski down from the Wildhorn 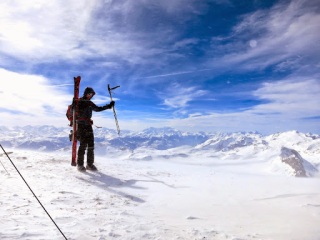 Windy summit of the Wildstrubel 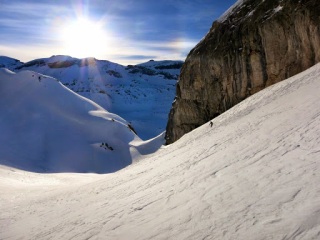 Ski down from the Schneiderhore

Rocky ascent up the Schneiderhore

Sunrise from the Wildhorn hut

Ski down through the glacier of the Wildstrubel

incredible ski down to Kandersteg

Kind local giving us a lift at the end